bolwerK is a non-exclusive and temporal constellation that  has been initiating, mediating, facilitating, curating and appropriating  local and international projects since 1998. Social environments are  created, not for streamlining ideas, but in order to formulate  shared/common questions and hence feed a sense of communality.
http://www.ooooo.be

Marthe Van Dessel  is a  performer, hacker, activist, who creates interfaces, devices & protocols to instigate our urban and institutional hardware. She engages in the administrative, cultural, political dimension of personal and collective identities. By triggering intersubjective alliances she confronts the 'self & other' to the commons, co-authorship and the redistribution into the public domain. 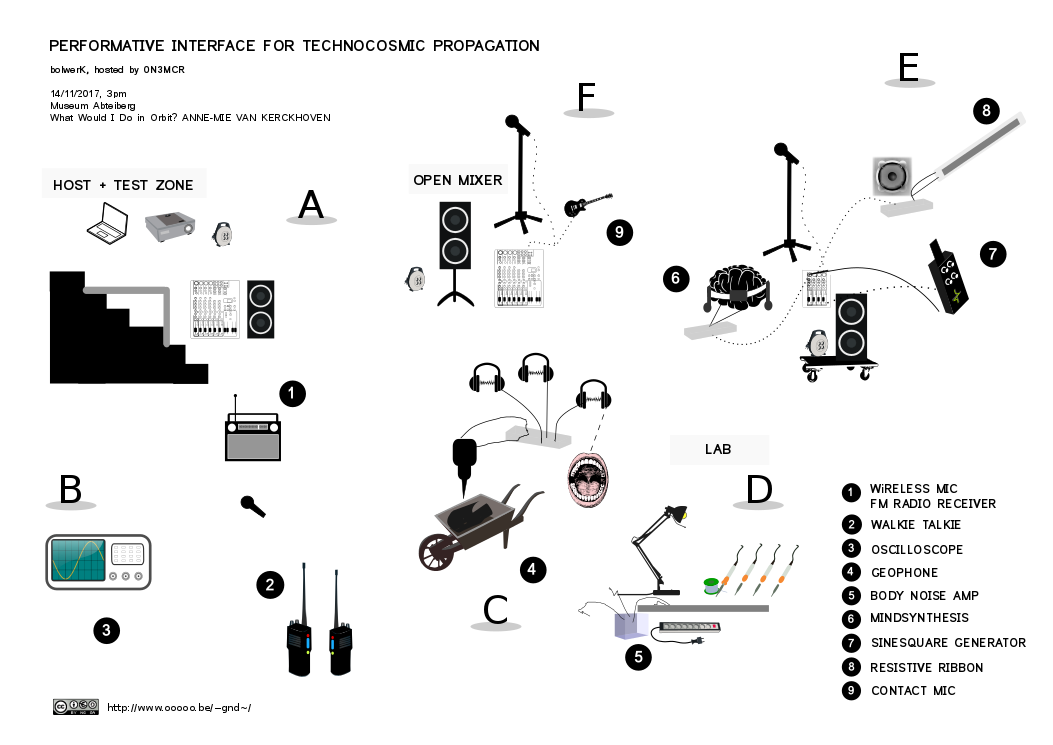 * A geophone
* is a device that converts ground movement (velocity) into voltage. The deviation of this measured voltage is sonified by an amplitude modulation..oscillator (Axoloti)

* A body noise amp
* is device based on an amp based on LM386 chip. This device transforms body  electrical activity in sound by contact between different bodies.  http://quimerarosa.net/bodynoiseamp/
* A mindsynthesis
*is a device which sonifies brain frequencies https://hsbxl.be/Mindsynthesis
*
* A chaospoti
*is a device which creates chaos by using the bodies resonance
*
*A massage laptop

*Oscilloscope
*Is a type of electronic test instrument that allows observation of constantly varying signal voltages, usually as a two-dimensional plot of one or more signals as a function of time. 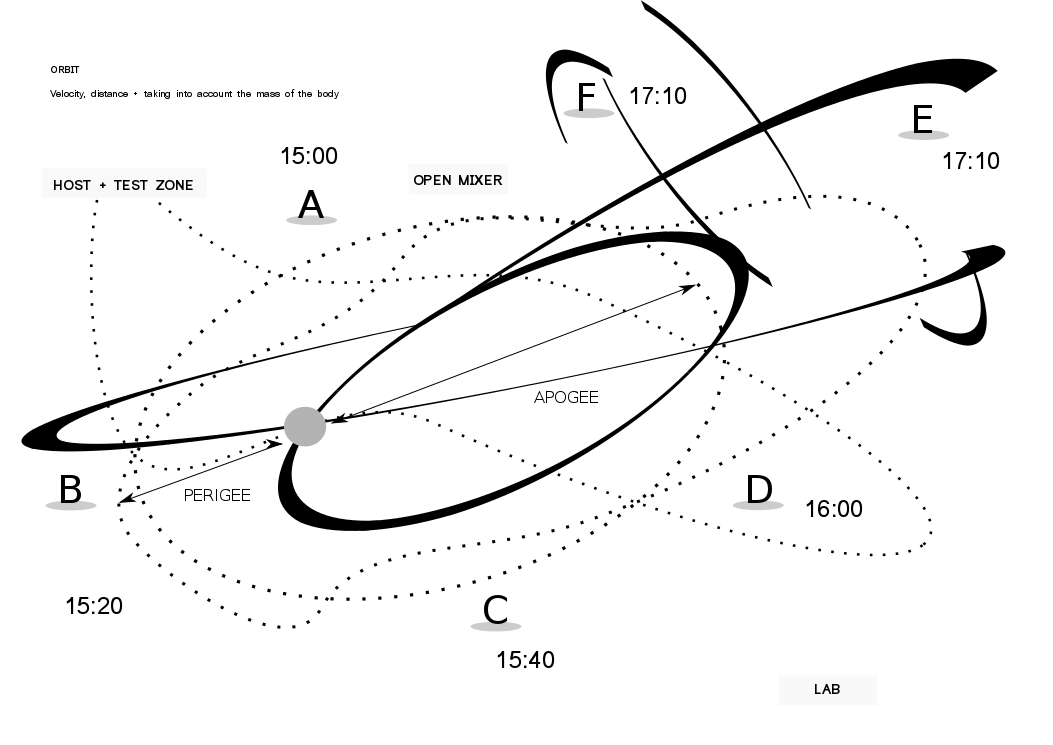 we orbit : we / ooooo
constitute a collective disembodiement, anidentity, in an intractagorical complexity, without binaries.
fluid, becoming ~

Today we will inhabit and enable diverse/other morphologies, bodies, physiologies and experiment with how technology can hack into our pyscholgical, neurological, ...experience how it, he, she, we,  can immerse us, temporarly into different positionalities, in a very queer desire to break with the dominant, normative and often violent narratives and technologies, of representation and experiences, that we exist within, that pre-exist us and that are always already producing our subjectivity, permeating our lives up to the most personal and subtle levels.

This desire is not just escapism: when we immerse ourselves in realties in which we are not disempowered, and where experiences are centered. Espcially when we do it seriously and collectively. If we can take ourselves out these heavy oppressive and often violent environments where we always are already other, based on cultural, scientific and theorical narratives which preexist us.

Momentum created between lived and fantasy positionalities is where we can begin to decolonize our imagination, reimagine and represent our own subjectivity constituted within, a constant becoming , non observed states, into the dynamic of particle and wave.

>put on radio<
>switch on wiress microphone<
> test < hear feedback : Feedback occurs when outputs of a system are routed back as inputs.
this ON3 MCR > cq cq cq this ON3 MCR
Frequency 89.6
my QTH is Mönchengladbach, Abteiberg,
My Radio is a fm worldreceiver, i am using a self built wireless microphone on FM

Good afternoon, Your report is 5 by 7

<picture: emf>
this is a visualisation in 2 dimensions of the electromagnetic spectrum
<picture : technopolitcal 1970 - Bogota>
we were just on frequency -fm band

<picture>  ionosphere>
some bounce on the ionossphere, fm, am, vhf, ...
some microwaves go through the ionesphere ( gps, mobile phone, ...)

<picture> interface with instruments for technocosmic propagation>
To generate an orbit.
As amvk questions / what would you do in orbit? what would i do in orbit?
The gravitationally curved path of an object about a point in space.

<picture> Merkabah meditation>
today, we are not going to build an immense - tetrahedron to overcome matter: by travelliing in space& time

with the introduction of quantum mechanics and physics  (a century ago in th e meantime)
we need to drop the scientific or mechanical paradigm of cause and effect ad newtonian mechanics and enter the phenomenon
dynamic of different states, variable -
singural (if you want to hold on the ego) or plural.
particle or wave

<picture: Azimuth>
space - like a map: mostly we know maps from century but a lot of people navigate and communicate by the Azimuth map
relative to the observer and the sphere
time - clock

<picture: stones>
today, we are not goingto intra-act with stones/minerals http://purestenergy.org/generators.htmlwith and their energetic values,

but someting we have daily in our live....tech (gadgets, pacemakers, ...) which we we intra-act with our bodies and mind
knowing that these devices which also contain some of this sourced - minerals & energy sources
sometimes considered as extensions with a  (post) colonial attitude

these devices have frequencies,
like technoshamaman in brazil; browsing trash which has a soul

The path that lightning takes is not only
not predictable, it does not make its way in
some continuous fashion between sky and
ground. There is, as it were, some kind of
nonlocal communication effected between
the two. By some mechanism scientists
have yet to fully explain, a storm cloud be-
comes extremely electrically polarized –
electrons are stripped from the atoms they
were once attached to and gather at the
lower part of the cloud closest to the earth.
In response, the earth’s surface becomes
polarized with these earth-bound electrons
burrowing into the earth. A strong electric
field between earth and cloud results, and
all that remains to be accomplished now is
a conductive path joining the two. The first
inklings of a path have a modest beginning
offering no indication of its explosive end.
“It begins as a small spark inside the cloud
five miles up. A spurt of electrons rushes
outwards, travels a hundred meters then
stops and pools for a few millionths of a
second. Then the stream lurches off in a
different direction, pools again, and again.
Often the stream branches and splits. This
is not a lightning bolt yet” (Discovery
Channel 2007). 37 These barely luminous
first gestures are called “step leaders”. But
the buildup of negative charges (electrons)
in the lower portion of the cloud does not
resolve itself by a direct channel of elec-
trons making their way to the earth in this
fashion. Instead, the ground responds next
with an upwards signal of its own. “When
that step leader is within ten or a hundred
meters of the ground, the ground is now
aware of there being a big surplus” of
charge, and “certain objects on the earth
respond by launching little streamers up to-
ward the step leader, weakly luminous plas-
ma filaments, which are trying to connect
with what’s coming down”. It is as though
objects on the ground are being hailed by
the cloud’s interpellative address. When
one of the upward responses is met by the
downward address, the electrical circuit is
closed and a powerful discharge is effected
in the form of a lightning strike. But even
35
after the path has been carved, as it were,
the discharge does not proceed in a conti-
nuous fashion: “The part of the channel
nearest the ground will drain first, then suc-
cessively higher parts, and finally the charge
from the cloud itself. So the visible light-
ning bolt moves up from ground to cloud
as the massive electric currents flow down”

<picture: earth orbits us>
We orbit, we are on earth, in 365 days we orbit around the sun.

There is gravity and a magnetic field.
But to guide us, I go a little bit confused with orbit on a macro scale and on a nano scale
and language / sprache / taal - etymologically / orbite - eye :
late 14c., "the eye socket," from Old French orbite or directly from Medieval Latin orbita, transferred use of Latin orbita "wheel track, beaten path, rut, course, orbit"

An object's momentum and the force of gravity have to be balanced for an orbit to happen. If the forward momentum of one object is too great, it  will speed past the other one and not enter into orbit. If momentum is  too small, the object will be pulled into the other one and crash. Orbital velocity is the speed needed to stay in orbit. At an altitude of  242 kilometers (150 miles), this is about 17,000 miles per hour.  This  is just a little less than full escape velocity. Low-Earth Orbit (LEO) 90 minutes. (photgraphic) Geosynchronous Earth Orbit (GEO), Molnya orbit still / lightening).

The time it takes a satellite to make one full orbit is called its period. When a meteorite enters our atmosphere and becomes a "shooting star," it is no longer in an orbit.

<slide >Force:
Velocity, distance + taking into account the mass of the body
we could calculate
orbit§/

But offcourse we do have resistance.
<experiment: measure resistance>

A physical body as a whole is assumed to have such quantitative properties as mass, momentum, electric charge
In mysticism, such as theosophy, the physical body is understood as the last of several progressively denser "vehicles of consciousness"
body is contrasted with the self, mind, spirit, soul, or astral projection.

propagation: longitudal or transverse
Transverse wave is one of the two basic forms of waves. To understand a  transverse wave, an essential understanding of wave mechanics is  required. A wave is a method of transferring energy. As the wave  propagates through the space, energy it carries is also propagated. This  energy causes the particles on the way, to oscillate. In other words,  the energy is propagated through the oscillation of particles.
In transverse propagation the particle displacement is perpendicular to the direction of wave propagation. In longitudal propagation, particle displacement is parallel to the direction of wave propagation and oscillate about a fixed equilibrium point in space.  Since the oscillations are parallel to the movement, a pressure  difference is caused.  (e.g soud > in the ear)

Magnetoreception  is a sense which allows an organism to detect a magnetic field to  perceive direction, altitude or location. This sensory modality is used  by a range of animals for orientation and navigation,[1]  and as a  method for animals to develop regional maps. For the purpose  of  navigation, magnetoreception deals with the detection of the Earth's  magnetic field. Humans are not thought to have a magnetic sense, but  there is a protein (a cryptochrome) in the eye which could serve this  function.

Professor R.Wever from the Max Planck Institute for Behavioural  Physiology in Erling-Andechs, built an underground bunker which completely screened out magnetic fields. Student volunteers lived there for four weeks in this hermetically sealed environment. Professor Wever noted that the student's circadian rhythms diverged and that they suffered emotional distress and migraine headaches. As they were young  and healthy, no serious health conditions arose, which would not have  been the case with older people or people with a compromised immune  system. After only a brief exposure to 7.8 Hz (the very frequency which  had been screened out), the volunteers health stabilized again.


A moving magnet, generates a current in a coil, there is a flucuation of tension (Voltage difference)
show magnetic field https://www.youtube.com/watch?v=AgZHqfIBkUI
To sonify this voltage difference I use, Amplitude modulation, and make the electromagnetic frequency, hearable
Amplitude  modulation is a modulation technique used in electronic communication,  most commonly for transmitting information via a radio carrier wave

Body as a sensorial interface

THE STAIRCASE AT THE ENTRANCE
*OUTSIDE THE MUSEUM ON THE GRASS

STAIRCASE TO THE ENTRANCE OF THE ATRIUM
The Fifth Force.

THE LITTLE CINEMA IN THE FOYER
*Cumulator - video
*
THE GRAPHIC KABINET

(Site generated by E2H, an "Etherpad hypermedia" project by @dcht00).

This work is licensed under a Creative Commons Attribution-NonCommercial-ShareAlike 4.0 International License.